I just finished my second year teaching. Pretty much the whole time I've been thinking hard about class discussion in math class. My teacher prep program (Boston Teacher Residency) was BIG on class discussions, so from the beginning of my career it's been a big thing I've thought about. That's not to say it's been a big part of my practice. I've got a lot of questions I'm trying to work through, a few answers, some resolution, and a bunch of unresolved issues. I'll try to present not only my current conclusions, but some of the narrative as well. I'll try to break this reflection into chunks. This is Part 1.

To be clear, when I say "classroom discussion," I mean a class full of students, all talking about a topic, or series of topics, for a sustained time (like...more than a couple minutes?). This looks mostly like one student talking at a time, and everyone else listening. The teacher may or may not be involved, and there may or may not be any other participation structures.

Experiencing Classroom Discussion as a Student

In math class, the discourse was almost entirely centered around the teacher. I never found discussions particularly educational. I'm not sure who did. For the most part, the content seemed pretty cut-and-dry. Image of a traditional classroom, the teacher's modeling and lecture provided all the information. Any small details, confusion, or minor discovery came out in the problems sets completed alone at home. I never feel the desire or need to wrestle over the math in discussion.

In my smaller math seminars later in college, where the professor explicitly invited discussion, we were all so intimidated and self-conscious that we didn't want to participate for fear of revealing how little we understood. By "we," I mean my friends and I who bonded over how lost in the sauce we felt so often. I presume there was at least a handful of people who felt, as I did in high school, that discussion was unnecessary or uninteresting.

These experience as a student led me to form the following schema about classroom discussion:

It felt like there was a pretty narrow target of students who benefitted from discussion. I would say these students are in the "Zone of Utility," where classroom discussion provides some kind of utility or benefit. They are relatively small "Goldilocks" group where the content is neither so hard it's intimidating, or so easy it's uninteresting to discuss. One assumption of this model is that understanding is one-dimensional spectrum, which is an oversimplification for sure.

What They Taught Me In Grad School 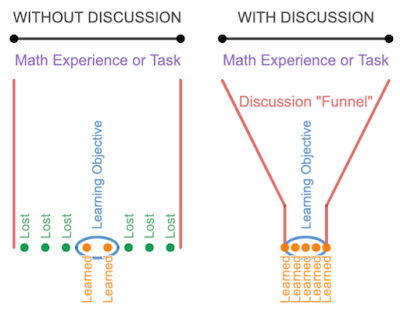 What I learned from experience about classroom discussion in grad school:

This discouraging experience led me to form the additional model about how my classroom discussions went (and how I thought they went down in many other classrooms): 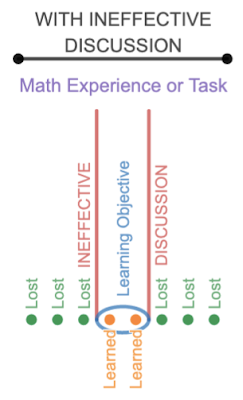 Why bother? During my residency year and the vast majority of my first year teaching, this is what it felt like I was doing. It felt like there was no new learning happening during the discussion. Or, that is, it felt like the thing that my students were learning was that discussions are not useful for learning math. So I would bail on them. Pretty much every time. I'd rather let students keep working right up until the end of class, because I felt it was more likely that they learn something during the independent-/group-work time than during a discussion.

My end-of-class discussions weren't going particularly well. Where any of my classroom discussions going well?